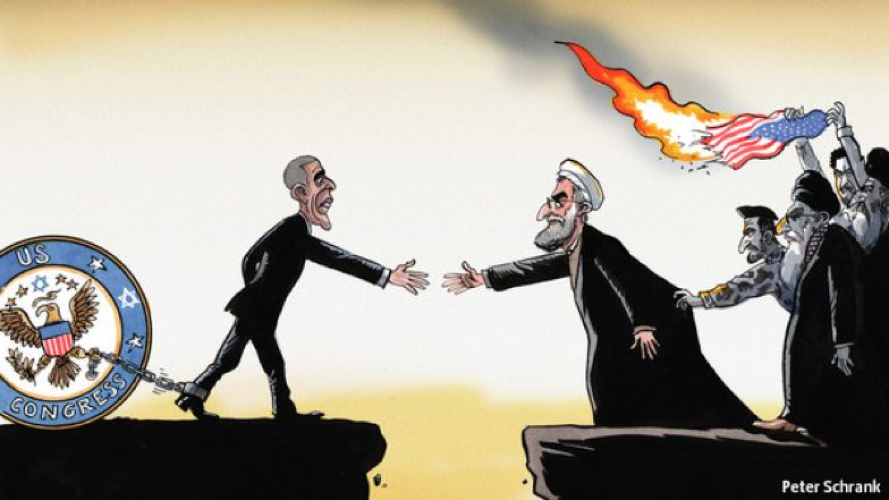 After years of open hostility and even threats of actual confrontations, the West and Iran seem to have embarked on a new path of dialogue and reconciliation which above all marks a significant ideological shift in the revolutionary agenda of the Islamic Republic with its existential claims to the principles of the raison de fois. Nevertheless as I argue here below the underpinning ideological foundations of the Islamic Republic would actually provide for a much deeper level of antagonism that this apparent façade of smiles and hand-shakes could easily cancel out.

Let’s start with the Islamic Republic’s Constitution whose preamble calls for a global promotion of the Islamic values and an unqualified support for all “downtrodden” of the world by actively fighting the western hegemonic powers and their regional allies.

Therein one is constantly reminded of numerous recollections of the role of the international “imperialism”, particularly the United States and its “international oppressive and arrogant world policies” which the Islamic regime claims to be intended to fight “in and outside the country”. Hence the Islamic Republic’s mission is declared to be the unification of all Muslims and indeed beyond this to liberate all oppressed people of the world!

This is again reflected in the paragraph related to the role of the military in RI.This very eloquent passage reiterates the importance of religion and ideology in the formation of the military apparatus whose role would not be limited to safeguarding national frontiers, but it is most importantly extended to include the mission of expanding the rule of God on earth and performing the ideological fight in the form of jihad for the divine cause in a millenarian project of paving the grounds for the arrival of the hidden Imam.

Now a quick comparison with other comparable totalitarian regimes’ constitutions readily reveals astonishing potentials for antagonism. The North Korean Constitutions for instance do not include such overt declarations of hostility to the point that one of the main achievements of that ideological order is claimed to be its contributions made to the “world peace and for friendship among the peoples”.

In fact the utter repudiation of all the non-Islamic doctrines in the Preamble to the Iranian Constitution – which defines them as corrupt and decaying, would in theory leave little space for any recognition of incongruent ideologies. Although the text falls short of any direct proclamations of military action, it could well inspire various ideological conflicts which would be difficult to settle in the light of this inflexible doctrinal conviction arising from specific interpretations of the religious dogma.

Now it goes without saying that these revolutionary proclamations might well be interpreted in the light of the sentimentalist ideological propaganda feeding upon various historical grievances. Nevertheless they would certainly do little to build any grounds for mutual trust and much needed procedural principles of the negotiation of ideologies based on accepted mutual recognition of equal standing of principles which in turn could entail significant compromises to accommodate at times diverging viewpoints.

On the onset of the Islamic Revolution in Iran, the late Ayatollah Khomeini, in order to effectively eliminate all rivaling political factions, shrewdly established his own network of police, financial institution, judiciary system and even a prominent corpus of the armed forces. These still function under the Leader’s direct supervision and in conjunction with, and in most cases, prevailing over the “republican” institutions and organizations.

This considerable imperium still strongly dominates all Iranian political and socio-economic fields to the point that it is claimed around half of the Iranian economy is actually managed by this unelected, nontransparent pervasive politico-economic hydra at numerous levels. These are precisely the organizations that not only have significant vested internal interests but also dictate overriding international policies in particular as far as the economic and financial interests are involved. The Islamic revolutionary guards for example is currently one of the main actors in the Iranian oil industries which has paradoxically benefitted from the western economic sanctions against Iran by reaffirming its presence in all strategic sectors of the Iranian economy. Thus no doubt that all these powerful institutions not only embody diverging and at times incompatible interests on numerous grounds, but they also represent a great obstacle against any international involvement in the Iranian economy that might entail a certain level of transparency and accountability.

It has to be acknowledged that while it is frequently mentioned that the current negotiations are held under the auspicious of the Office of the Leader and his powerful entourage, one would struggle to identify any explicit endorsement of such foreign policies at any significant levels. It has to be reiterated that based on the Iranian Constitution it fails under the Leader’s purview to lay down the main guidelines of the IR’s foreign policies. Thus although there are some signs that the semi-elected section of the regime out of numerous pragmatic and utilitarian considerations has decided to exchange the sword for an olive branch, this is still far from an “ideal speech condition” in which one could hope to arrive at a compromised solutions in the absence of any clear commitment by all sides.

Finally the fundamental point that has to be underlined here is that Iran actually does have the right to a peaceful development of nuclear energy within the NPT guidelines. No need to point out that other regional countries some of which with much lower level of international transparency do have far more developed nuclear programs. Notwithstanding what the West needs to be more concerned about is the actual track record of the regime on democratic accounts. Three decades of the IR’s experience unequivocally demonstrates that a political order which has not stopped at any measure to suppress all diverging beliefs within its borders and aggressively used and continues to employ violence against own people could obviously not constitute a reliable interlocutor for the international community.

Thus although it is evident that the Iranian nuclear issue is fervently pursued by the international community as the only means to exercise pressure on the Islamic Republic, this could potentially overshadow far more serious concerns regarding the adherence to the basic principles of human rights and democratic values which if adequately addressed would undoubtedly make any derivative international considerations redundant.